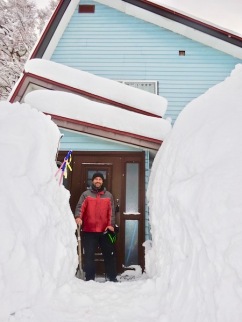 When we experienced our first major snowfall in northern Japan as new missionaries, we took lots of pictures and videos thinking, “This is a lot of snow!” However, with each successive snowfall over the following months and many rolls of film later, we finally grasped what a “lot of snow” really was. As a snow country novice raised in Texas, I was clueless. We had been forewarned about what to expect by our senior colleagues, but that was no substitute for actually experiencing firsthand drastic winter conditions. Over twenty feet of snow per year is a LOT of snow.

Northern Japan actually boasts of having the top two snowiest cities in the world, Aomori City and Sapporo, the later in which we resided for many years. The major city of Sapporo spends almost 200 million dollars every winter for snow removal as it struggles to keep 3,355 miles of public roads and sidewalks clear for vehicles and pedestrians. Gigantic snow removal machines prowl the city streets at night like nocturnal animals carving out tunnels as they battle the icy elements. Over the course of winter, enormous snow mountains several stories high begin to emerge throughout the city in the form of ancient ziggurats, standing as dramatic monuments to the challenges of winter weather.

Individuals are armed with their own weapons for winter warfare, which are conveniently sold in most stores. These would include snow shovels in various sizes and colors, snow blowers, and the so called “mama dump,” which is a large two-handed scoop used for hauling away the unwanted snow. Many houses now come with heated parking spaces, eliminating the need for snow removal; snow melting machines are also quite common. These innovations are quite useful since places to dump all the white stuff are scarce and highly contested. Families are keen to live next door to local parks where their kids can play, but these locations are also highly coveted as a dumping ground by veteran snow removers. Playground equipment soon disappears, eventually reemerging in the spring.

One important lesson we learned early in our snow removal career was to ALWAYS leave one’s snow shovel standing upright in the snow to avoid losing it during the next blizzard. The same principle applies to anything of value, as it will quickly disappear in an unexpected snowstorm and will likely remain lost until the spring, when the accumulated snow finally recedes.

Like objects hidden in the snow, the most blatant and ugliest of sins can be hidden from public view. Certainly no one but God knows the depravity of our hearts. Fresh snowfalls may cover a multitude of eyesores, but they eventually melt away revealing the unsightly reality that often lays beneath. This is why the Psalmist prays not to have his sins covered by snow, but to be white like snow. There is a huge difference between these two approaches. True repentance and holy living is not just a cover up or denial of past misdeeds, but rather, a complete forgiveness based upon the amazing power of the cross. While men can remove snow, only God can remove sin.

One thought on “Snow Country”