“There is a time for everything, and a season for every activity under the heavens.” Ecclesiastes 3:1 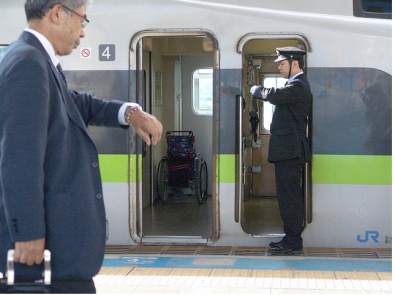 Japan has a well-earned reputation as a country where things run on time. For example, thousands of trains every day across the country, routinely pull into their assigned stations exactly on schedule. Customers send packages or luggage through a nationwide delivery service and then choose a date and four-hour window in which they want their item delivered, which usually occurs without fail. At construction sites for buildings or roadwork, signs are posted notifying when the job will be completed and they are seldom wrong. Fast food service seems effortlessly fast in Japan and repairmen show up as promised on time, if not early.

In the rare cases where a scheduled appointment is broken, service is slow or a train pulls into a station late, extensive apologies are usually expressed with the promise to do better in the future. When a train is unavoidably delayed due to an earthquake or a tragic suicide on the tracks, causing thousands to be inconveniently delayed, rail officials will diligently hand out “late notes” to affected commuters to cover their tardiness at work. One train recently departed from the station 25 seconds early, which became quite a scandal in Japan and called for new measures to prevent a repeat of such a disastrous scenario.

This seemingly obsessive focus on punctuality drives employees to arrive, not just on time at their place of work, but to actually get there early, so they can begin their job precisely as scheduled. No one quite knows when this meticulous focus on time began in Japanese culture, but it was certainly invigorated when Japan joined the family of nations in the 19th century and later took on even greater importance as part of the rebuilding process following WWII. However, companies are discovering that an emphasis on punctuality doesn’t always correspond with increased efficiency. Others who endure endless mind-numbing meetings wonder why there is such a preoccupation with starting on time, but almost an indifference with ending such meetings on time.

To the outsider, Japan seems like a well-oiled machine, where everything works and runs as planned, which for the most part, is a really admirable characteristic. It is a helpful reminder that God is a God of order, who has created a universe that is governed and measured by time. Although He Himself is not bound to the restraints of time, it is one of many resources placed at our disposal and we are expected to be wise stewards as to how we use it. This does not excuse an imbalanced obsession with time, but should rather encourage us to treat each hour, each day and each year as a gift from God that we should use for His eternal purposes and not for our own. We serve the Master of the Universe, and as such we are not slaves to time but rather, time exists to serve us. May we use it wisely.