“Nothing outside a person can defile them by going into them. Rather, it is what comes out of a person that defiles them.”   Mark 7:15 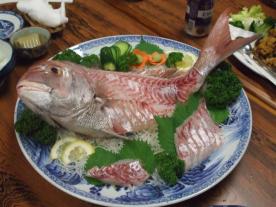 I had previously eaten sashimi, which is fresh raw fish, or meat sliced into thin pieces, but the bizarre culinary creation that now lay before me was an entirely new experience. Artfully displayed on the table where we were seated was a live fish still opening and closing its mouth. Observing the reaction of my fellow diners who were reaching for their chopsticks, I soon realized that this was the centerpiece of our meal. Now, I am no stranger to live fish as a fisherman, but this was something altogether different from my previous forays into the wonders of seafood. I soon learned that this Japanese delicacy is called ikizukuri (生き作り), which is roughly translated as “prepared alive.”

We had actually chosen our “victim” when we entered the restaurant from several tanks containing live fish, octopus, shrimp, lobsters and squid. I had naturally assumed that the fish would then be sliced into traditional sashimi, fried or broiled. Instead, a specially trained chef deftly removed the edible portion of the still living fish, sliced it into tiny bite-sized pieces and expertly placed it all back into its original location. The obvious objective of this culinary dish is to provide the ultimate experience in feasting upon fresh sashimi. This, of course, is evidenced by moving gills, tail, antenna or tentacles, depending on the creature being consumed.

As to be expected, this unique practice has invited a certain amount of controversy from critics who consider the custom barbaric and cruel to animals. In reaction, a few countries have even gone so far as to outlaw food prepared in this manner. However, ikizukuri advocates claim that the muscle twitching observed in the entrée is merely the residual response of the dead creature’s nervous system, rather than the labored movements of a dying victim. As for me, I thought the sashimi that evening was particularly delicious, but I was careful the whole time to avoid eye contact with the fish that became our meal!

The Old Testament contains numerous prohibitions of things not to be eaten, or how they were not to be eaten, as part of its ceremonial law. For example, some types of meat were declared to be “clean” and others were considered “unclean” and, therefore, to be avoided under all circumstances. These ceremonial laws were rigidly adhered to and enforced by many of the religious leaders in Jesus’ time, but their zealousness to preserve such practices caused them to lose sight of far more important matters. Jesus pointed this out when He said to them, “Nothing outside a person can defile them by going into them. Rather, it is what comes out of a person that defiles them.” In saying this, Jesus contrasted the huge difference between ceremonial defilement (what is outside a person) and spiritual uncleanness (what comes out of a person). The latter is called “sin” and all of us are under its dominion as evidenced by our proclivity to lie, lust, slander, judge, hate, boast, envy, etc. Judging from outward appearances, we may look appealing, like the ikizukuri fish on a plate, but no matter what we do, we are still dead in our sins. Our attempt to achieve righteousness through our own efforts is mere twitching on the platter. Only God can resurrect the dead and truly cleanse us.